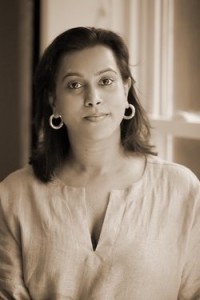 Author Falguni Kothari has very kindly agreed to return to my blog with a guest post on her latest release SOUL WARRIOR. The guest post is inspired by one question which I ask almost every author who appears here.
Maria: What inspired you to write this novel? Over to you, Falguni!
Falguni: I am a natural born myth geek. Give me a bunch of squabbling demi-gods with sinister agendas, herculean heroes on impossible quests, and a magic-infused bejeweled weapon or two and I’m in mythic heaven. The concept of Soul Warrior grew from that obsession, and this burning question: what if we take away the metaphor from mythology?
What makes a hero? What is magic? What if Gods literally walk among us? What if Heaven and Hell and every realm in between exists? And what if India’s magical, ancient past isn’t its past at all?
Soul Warrior is an urban fantasy novel based in the cultural myths of India. It’s the first book in the Age of Kali series, and its protagonists are Karna and Draupadi, two central characters from the ancient Indian epic, the Mahabharata. The geek in me couldn’t resist tinkering with that data and just had to pen “Marvel’s Thor with an epic Indian star cast, and a dash of Bollywood drama.”
Cultural mythology, quite possibly, is the first ever offering of speculative fiction. For Soul Warrior, or even my contemporary romance novels, I had to look no further than my dusty Amar Chitra Kathas (Indian comic books) for story ideas. Amar Chitra Katha literally translates to “eternal picture tales” and they draw material from the vast and ancient mythos of India. India also claims the honor of penning the oldest and longest epics in the world—the Ramayana and the Mahabharata.
Ramayana tells the story of the archetypical hero, Ram, the ideal man, who rescues his wife, Sita, from an evil demon named Ravana with the help of an army of monkeys, only to abandon her soon after to please his human subjects. The Mahabharata is a grander epic where generations of disagreements between two warring factions culminate in an apocalyptic war that wipes out most of humanity.While heavy in philosophy and the ideal way of life, both epics describe in some detail flying vehicles (vimana), nuclear-type weapons (divya astra), voice-activated (mantra) weapons, and what happens when they are deployed. They also portray the existence and purpose of supernatural beings, magic, extra-terrestrial worlds—in other words, all kinds of SFF goodies. So really, with such a fantastic playing field, writing mythic fantasy was a no-brainer for geeky me.
If I may exaggerate, most Indians begin to hear the classic versions of the epics from when they’re in their mother’s womb. It’s part of our DNA. Ever gratefully, I have taken at will what I wanted from India’s handy mythology, and hopefully have managed to twist and fit the ancient stories into my modern workwith delicate precision without compromising their integrity, or making them unrecognizable to their familiars.
To readers who are not familiar with Indian myths, put on your seatbelts and get onboard for the adventure ride that is Soul Warrior (the Age of Kali, #1).
Thanks for reading.
~ Falguni.
Soul Warrior: Age of Kali
by
Falguni Kothari 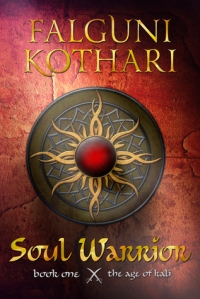 Fight fate, or succumb to destiny?
In the dark Age of Kali, the Soul Warrior alone stands guard over the Human Realm, protecting its denizens from evil-willed asuras or demons. When a trick of fate appoints him guru to a motley crew of godlings, he agrees to train them as demon hunters against his better judgment. Suddenly, Lord Karna is not only battling the usual asuras with sinister agendas, but also rebellious students and a fault-ridden past.
Spanning the cosmic realms of mythic India, here is a tale of a band of supernatural warriors who come together over a singular purpose: the salvation of Karna’s secret child.
SEE THE PREVIOUS POST FOR MORE INFORMATION ON FALGUNI KOTHARI AND HER NEW RELEASE, SOUL WARRIOR BOOK ONE, THE AGE OF KALI
Labels: Falguni Kothari Indian Author. Indian Writing in English The Book Club