CHRISTINA HOLLIS ON THE WEB: 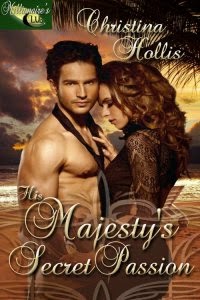 Leo Gregoryan is determined to be the perfect king. Loyalty to his country means sacrificing his own happiness, but he’ll divert the energy he once poured into his dream of becoming a doctor toward royal duties. All he needs right now is a stress-free vacation–no future queen need apply. Sara Astley escapes to the luxurious Paradise Hotel after she’s dumped by her partner, who then stole the promotion she’d expected. She hides her broken dreams behind a tough exterior. Her stubborn streak makes her a challenge Leo can’t resist. His special brand of hands-on persuasion seduces Sara into enjoying the holiday of a lifetime. Their fling can't hurt either of them–or so they think. Leo's focussed on being the ideal hero. Sara knows what she wants, and that’s independence. Then a revelation tears them apart, meaning things can never be the same between them...
GET THIS BOOK HERE:
The Wild Rose Press       Amazon     Amazon UK
One Kindle copy giveaway of His Majesty’s Secret Passion
Link to signed copies giveaway on Goodreads
Labels: christina hollis Contemporary Romance Wild Rose Press